This was my fourth visit to Uganda and my second with the Rotary Doctors Bank previously having spent time at Villa Maria Hospital. Prior to my visit to Kamuli, I was dismayed to receive the news that following, an inspection the X-ray Department had been closed by the Ugandan Atomic Energy Council (AEC). The Medical Superintendent, Dr Andrew Muleledhu, e-mailed with a list of requirements, mainly radiation protection issues, that needed to be met before the Department could be reopened. This then gave me a good focus for my trip and enabled me to do some preplanning and research before I left home.

They have been unable to employ a qualified radiographer at Kamuli due to lack of funds and the inability to attract staff to such a rural location. They therefore employ Joseph as a layperson to take and develop the X-rays. He has received minimal training in radiography positioning but no training in the principles of radiation protection. I was also told that theirs is the only functioning X-ray department in the district and if it is out of action patients have to go to Jinja which involves at least a 3 hour round trip. This is obviously not an option in an emergency.

When I arrived at the hospital I was made to feel welcome and was impressed by the helpfulness of the staff. I was pleased that they had built an X-ray screen for staff to stand behind when taking the X-rays. The Department had therefore been reopened by the AEC but was due for a re-inspection in a month following completion of the other recommendations. One of these involved establishing a new Darkroom, which was at present very inconveniently in another building amidst a lot of rubbish. With help from the carpenter, electrician and a team of strong men we cleared and cleaned a room within the Department and set up a new Darkroom.

Another major concern, which came to light whilst I was there, was the inability to produce a diagnostic X-ray of a spine, abdomen or pelvis. This was due to a piece of equipment called a grid being missing from the X-ray table. Luckily I managed to locate one on an old piece of equipment in a storage cupboard and with help from the electrician extracted it and cut it to size. We then managed, with the help of some sticky tape, to put it into the X-ray table. This now means that patients do not have to have a trip to Jinja to obtain a diagnostic X-ray. 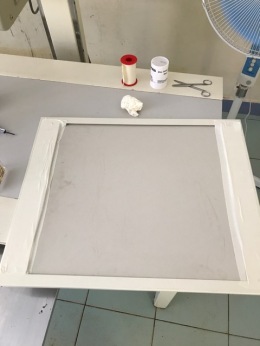 I brought with me from the UK new lead aprons, thyroid and gonad protection as well as X-ray cassettes, which require a lower dose of X-rays to produce an image. I also spent time establishing new exposure factors.

I would have liked to have spent longer at the hospital and hope to revisit as I feel that Joseph although excellent at chest X-rays would benefit from some teaching on radiographic technique for other parts of the body. I also feel that it would be of benefit to the nursing staff to receive some basic training on the safe use of radiation, as there seemed to be a lot of confusion on this.

My other area of concern is the developing of the X-ray films, which are “wet developed” at present. This involves manually immersing the films in the chemicals. This is not only a hazard to Joseph as the chemicals contain carcinogenic substances but also the quality of the X-ray suffers due to inconsistencies in the process and the fact they are then hung on the railings to dry! I am therefore hoping to find a small automatic film processor for Kamuli; similar to the one I took to Villa Maria.

My 17year daughter accompanied me, on my visit, and we would like to thank everyone at Kamuli for their friendliness and making us feel so welcome. My daughter spent time in a local primary school and was also invited to spend time on the wards shadowing a doctor and spending time with the student nurses. She is now considering a medical career!